Warning: count(): Parameter must be an array or an object that implements Countable in /home/customer/www/slivovitz.tastebrandy.com/public_html/wp-content/plugins/readers-from-rss-2-blog/readers-from-rss-2-blog.php on line 107
 NAVIP Slivovitz Serbian Plum Brandy – Slivovitz 
Warning: Use of undefined constant full - assumed 'full' (this will throw an Error in a future version of PHP) in /home/customer/www/slivovitz.tastebrandy.com/public_html/wp-content/themes/omega/header.php on line 17
[Read more...]" />
Share with

Many of us have not heard of NAVIP , but recognize the picture of the bottle:

Well, that is the famous plum brandy from company“ NAVIP“ Zemun near Belgrade, NAVIP Slivovitz Serbian Plum Brandy is probably one of the most famous plum brandies in the world. Did you know it is no longer distilled? It’s a long story. Let’s get started …

We believe today that NAVIP name is an abbreviation of “People’s wines and beverages“ (NArodna VIna i Pića) . It was founded as a farmer’s cooperative to which many of grape and fruit producers were selling their products and wines and spirits were produced out of it. The beverages were meant for the masses of consumers. Since the very beginning of the NAVIP, it was focused on massive desitillation of the large quantities of beverages of the acceptable quality. As many socialist Yugoslav enterprises.

1848. At the spot of Zemun NAVIP today, vineyards were grown and a large cellar was bulit.Wines and spirits were exported to Austrian and German cities. Later on the plant began producing a sparkling wine (we used to call it “champagne”) called Million. It was drunk by many Yugoslavs during New Year’s Eve.

1897.In avillage Crkvenac in Resava was established agricultural cooperative. It was later merged with the cooperative company in Zemun and our famous schnapps from the beginning of the text was distilled.

1911. In a village Jovce near Jagodina was founded the cellar, which was later merged with the company from Zemun .

In 1960. a plant in Petrovaradin, near Novi Sad was founded and vineyards were grown. The most famous product was Karlovački Riesling, wine of low quality usually packaged in bottles of 1 liter, which is often found on the tables of many Yugoslavs .

And NAVIP? When it was founded ?

NAVIP was established after the World War II by decree of the socialist authorities of Yugoslavia. Bruno Moser, who founded the winery in Zemun and his descendants , Germans by nationality, were nationalized all their property and NAVIP was established out of it. When in 1848. Moser founded his cellar, he never dreamed it would become the foundation of one of the largest wineries and distilleries in Eastern Europe. As if history is correcting the injustice made to the Mosers, so their name is still mentioned as the founders of the giant.

Product of NAVIP that is most interesting to us is the famous Šljivovica brandy in a round bottomed flask of 0.7 l, which wasa dear guest  on many tables of America, Australia and Europe. It was being destilled of fruits from the orchards of Crkvenac and many other orchards from Central Serbia. Lately, more than 200,000 bottles of the brandy were exported. It could not be bought in Serbia, all available quantities were exported, it was one of our recognized brand names .

The cellar , though being the pearl of our brandy exports, was closed down 2011. 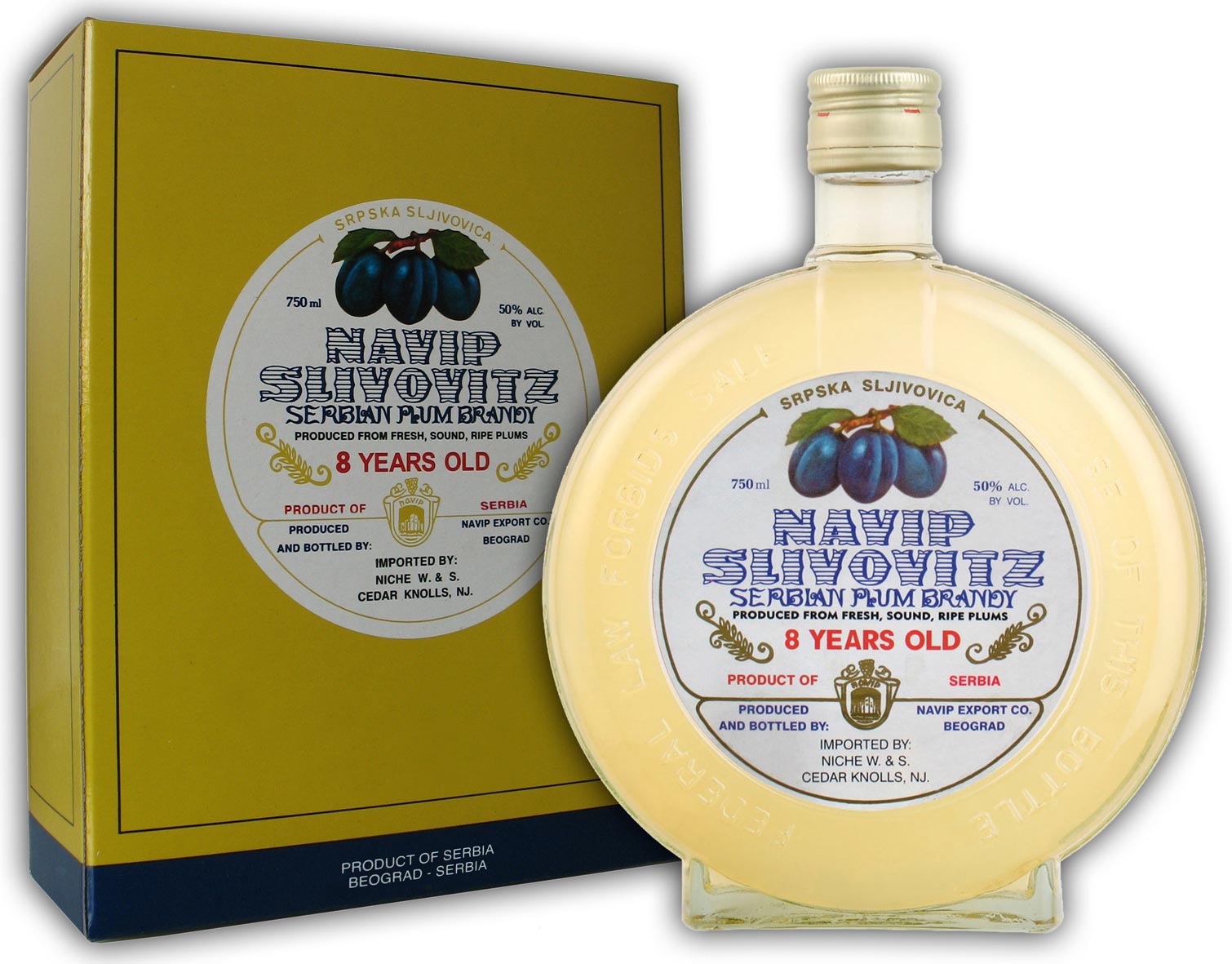 NAVIP Slivovitz – cheaper variety, aged for three years . Some of us even like brandy that is less aged . Had a lot of fans and loyal consumers .

Bardaklija – 1 – liter distilled Slivovitz from Pozegaca plum variety, aged for 2-3 years . Well known for the grandfather on its label , it was considered as ” Grandfather ‘s Drink ” .

NAVIP egsists no longer. It was swallowed by bad privatization , as well as most of the Serbian industry . Western consumers cannot enjoy its brandies and wines today . We strongly hope some new Bruno Moser will appear on the historic scene , who will have the vision and courage to build some new NAVIP. The orchards still exist , and consumers who have not changed their minds …