Warning: count(): Parameter must be an array or an object that implements Countable in /home/tastebra/public_html/slivovitz/wp-content/plugins/readers-from-rss-2-blog/readers-from-rss-2-blog.php on line 107
 Martyr Slivovitz – Slivovitz 
Warning: Use of undefined constant full - assumed 'full' (this will throw an Error in a future version of PHP) in /home/tastebra/public_html/slivovitz/wp-content/themes/omega/header.php on line 17
[Read more...]" />
Share with 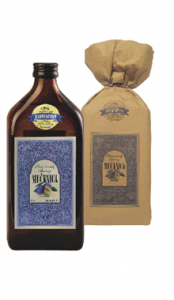 The producer of Martyr Slivovitz is a company called Ethno Spirit.
It’s well known that having slivovitz in different occasions is one of the traditions for people across Balkans, but not many people know how they get their names. The usual way of naming one is by the name of its producer. But when it comes to name Martyr it’s usually name for slivovitz that is very harsh, with the high level of alcohol and pretty hard to digest. I’m a bit confused why did the maker of this one named it this way because the only thing matching is high alcohol percentage. Other than that this slivovitz is just perfect. Even tho it’s strong it’s very drinkable and pleasant.
The producer of Martyr Slivovitz is a company called Ethno Spirit which makes various traditional foods and beverages by the traditional recipes. When it comes to this slivovitz they say it is made the same way as it was made in the seventh century.
The packaging is very interesting. The bottle is wrapped in brown paper and tied in rope while the bottle itself is black with a simple label on it. It reminded me on something I saw in westerns. Cork is also quite interesting and you can feel more of this slivovitz smell from it. First of all comes the strong alcohol odor mixed with wood-like aroma. Afterwards the plum kicks in, and strongly to be honest.
The color of Martyr is usual goldish, sun-like. Oak barrel did its trick when it comes to color for sure. Now, the best part of Martyr, taste. With exactly 45 percent of alcohol, this slivovitz is very mild and smooth. Dry taste of wood is easily mixed with sweet plum juice and your palate will appreciate this very much. Martyr glides slowly down to your stomach making you crave for more. Probably one of the easiest slivovitz to drink, at least in my case. I strongly recommend it for a long family events or special occasions with your close friends.