Warning: count(): Parameter must be an array or an object that implements Countable in /home/customer/www/slivovitz.tastebrandy.com/public_html/wp-content/plugins/readers-from-rss-2-blog/readers-from-rss-2-blog.php on line 107
 Manastirska Slivovitz Prokupac Review – Slivovitz 
Warning: Use of undefined constant full - assumed 'full' (this will throw an Error in a future version of PHP) in /home/customer/www/slivovitz.tastebrandy.com/public_html/wp-content/themes/omega/header.php on line 17
[Read more...]" />
Share with

The color of this brandy is very promising, light brown, see-through and dense. 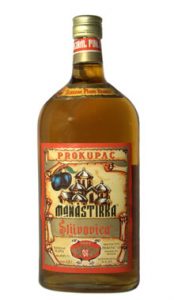 Before I start talking about this brandy, I’ll just inform you that this slivovitz is not a joke and it’s made for serious players. It has a long tradition and the producer was one of the most famous exporters in the ex-Yugoslavia. But, when it comes to the product itself in my opinion it’s not doing well in last few years. Most of older people say that Manastirka is not what it used to be in their youth. But let me tell you this it’s still worth trying and checking it.
My first impression of Prokupac’s Manastirka that it definitely needs a redesign of the label and bottle because it’s the same like when it was first introduced to the public in the sixties. The color of this brandy is very promising, light brown, see-through and dense. This comes from one year spent in wooden barrel before getting to stores. Once opened you can smell the rich and strong aroma that announces the taste.
Manastirka is made from one of the most aromatic plums, called Pozegaca, but once you taste it you won’t feel anything sweet. As I’ve said in the beginning, this is a drink made for serious players, so if you can’t stand the strong taste of alcohol and a bit bitter aftertaste in your mouth pass this one. For someone who appreciates the punch of liquor, like I do, this is a true pleasure. It’s not something you can compare to other famous drinks like whiskey or tequila. It’s strong, but the taste puts it on a whole new level.
For the price, you’ll pay you’ll get a real kicker that will last for quite some time since you can’t drink the whole bottle of it just like that. I would put this one in the middle class for its color and harsh taste, but I was disappointed how weak the taste of plum was. Definitely something you have to try and you’re your respect to its tradition, but probably not something that will become your favorite poison.