Warning: count(): Parameter must be an array or an object that implements Countable in /home/customer/www/slivovitz.tastebrandy.com/public_html/wp-content/plugins/readers-from-rss-2-blog/readers-from-rss-2-blog.php on line 107
 Gorda Slivovitz – Slivovitz 
Warning: Use of undefined constant full - assumed 'full' (this will throw an Error in a future version of PHP) in /home/customer/www/slivovitz.tastebrandy.com/public_html/wp-content/themes/omega/header.php on line 17
[Read more...]" />
Share with

The color of Gorda is similar to American bourbon which comes from the oak barrel for sure.

People who know about slivovitz as plum brandy always think of it as a strong hard liquor that will burn your insides right away, something for experienced men and women and something you don’t drink in big amounts. Well, Gorda is here to change the perspective you might have about this type of drink. What separates it from other brands and types of slivovitz is its mild taste and very gentle touch to your palate.
Every bottle of Gorda is filled with brandy that was sealed inside of the oak barrel for at least seven years. The bottle itself is very interesting and I would say it would maybe fit better to cognac or whiskey, but that is the catch. Gorda, as I’ve said before, is not like other, traditional brandies coming from Serbia. It is made for a totally different group of people and for a new, uprising modern market.
The color of Gorda is similar to American bourbon which comes from the oak barrel for sure. Once opened you can see how dense it is and I liked this a lot, especially in combination with its rich aroma. The smell is funny, there is no alcohol smell at all. Usually, people don’t smell slivovitz that much because of that aggressive alcohol fragrance. Gorda on other hand smells of citrus fruit, cinnamon and ripe plums.
When it comes to taste it’s so far away from what I’ve used to with this kind of spirits. Just like with smell you can sense citrus fruits with the addition of hazelnut and some berries, but I’m not sure which. If somebody served this to me in a bar I wouldn’t believe them this is slivovitz. But it’s quite simple, Gorda’s producers are going after new market and people that are just getting into slivovitz drinking or maybe even cocktail bars. I’m sure this product would blend great with some hip mixture in some night club, which is not something people used to.
The usual consumer probably won’t appreciate it that much since it’s not that good for a regular aperitif and snacks. Gorda is more something you’ll have as a refreshment drink or as a digestive. But, don’t be fooled, even tho it tastes quite mild it can get you very drunk, so don’t push it too hard with this one. 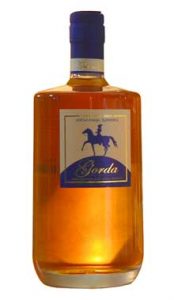