Warning: count(): Parameter must be an array or an object that implements Countable in /home/customer/www/slivovitz.tastebrandy.com/public_html/wp-content/plugins/readers-from-rss-2-blog/readers-from-rss-2-blog.php on line 107
 Fake Slivovitz behind the Low Price – Slivovitz 
Warning: Use of undefined constant full - assumed 'full' (this will throw an Error in a future version of PHP) in /home/customer/www/slivovitz.tastebrandy.com/public_html/wp-content/themes/omega/header.php on line 17
[Read more...]" />
Share with

If the Slivovitz is unreal cheap- most probably the alcohol is not of a fruity origin, but it was distilled from some other raw material with aroma of fruit added. 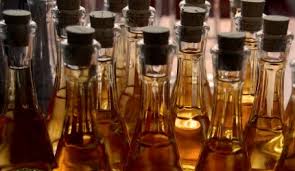 Is it possible a bottle of Slivovitz to be priced at 2.5 EUR or 3 EUR? What does the low price reveal? There are more and more cheap alcoholic beverages at Serbian market which might not be called fruit brandy (rakija) and legal producers point out that extremely low prices reveal the forgery.

– If a bottle of fruit brandy (rakija) has a retail price of 300 Serbian Dinars (2.8 EUR), unfortunately it is not so seldom, the alcohol was not distilled out of fruit, but of some other raw material. Fruity aroma is added after distillation in that case. The drink distilled that way is an alcoholic beverage, but it is not fruit brandy as it is very often written on the label-  says the owner of a family distillery that has been distilling fruit brandy for decades.

President of the National Consumers Association of Serbia Goran Papovic claims that alcoholic beverages priced at 300 Dinars should be- avoided. The Association made an analysis and turned out that huge number of the analyzed brandies that are sold in the domestic market are not of fruity origin.

Why cannot brandy be priced at 250 Serbian Dinars (2.1 EUR)? Producers say there are a lot of portions that make up a retail price.

If we deduct the price of the bottle, bolt, label, excise stamp, VAT and retail margin, it turns out that the retail price of 250 Dinars make out the producers price of 24 Dinars per litre. And it is impossible: a litre of double distilled brandy needs around 10 kilos of fruit and the fruit cannot be as cheap as 24 dinars (0.2 EUR). At least 12 times more.  Either it is fake or either the producer does not pay his obligations.

However, officials of the Ministry of Agriculture claim they monitor the market closely and that their inspectors prosecuted 633 controls of the registered producers in 2011. 2,300 controls of the traders were carried out: 164 of the wholesales, 516 of retail merchants, 994 of restaurants and cafes and 634 on the market places. 119,433 litres of alcoholic beverages were deprived as a result of the controls, 218 misdemeanor charges were submitted, as well as 23 charges for business offenses  and 26 criminal charges.

“The most common failures are incorrect labels that do not fulfill technical criteria and the usage of the illegal substances, such as sugar and aromas. All the controls are carried out by the end of the year, when the distillation is done and the brandy is stabilized”, the Ministry officials claim.