Warning: count(): Parameter must be an array or an object that implements Countable in /home/customer/www/slivovitz.tastebrandy.com/public_html/wp-content/plugins/readers-from-rss-2-blog/readers-from-rss-2-blog.php on line 107
 AS Group Igros Brus – Slivovitz 
Warning: Use of undefined constant full - assumed 'full' (this will throw an Error in a future version of PHP) in /home/customer/www/slivovitz.tastebrandy.com/public_html/wp-content/themes/omega/header.php on line 17
[Read more...]" />
Share with

There are many different ways to express bravery, and one of my favorite is stepping into the unknown. I really like 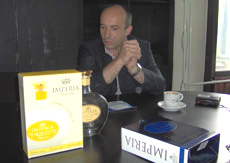 when people enter the caves no one has ever entered before, or dive in the underground lakes, or change their current profession for another, the one they dreamed of, but never had a chance to actually try it.

That’s why I admire the man who stands behind AS Group, Goran Stosovic, who took several steps many other people wouldn’t dare. First of all, from a small village called Igros, he dared to go to Chicago, where he successfully founded the construction company. Most of people who work abroad never return home, and here is another incredible step he took: many years later, he returns home, so that he can invest in the winemaking. In 2004, he founded AS Group, a company which produces brandy. Now, when people start their agricultural work of any kind, they usually look how to find their place in the local market, among people they know better… Of course, since he already lived in America, he had some idea of how American market is functioning, but still, his next step, to export his products to America was quite impressive!

His example proved that:”America isn’t a boogeyman,” as he likes to say.

While the company is called AS Group, the actual name for brandies is Imperian. So, if you’re searching for their alcoholic beverages, you need to search for Imperian Plum, Imperian Pear, Imperian Raspberry, Imperian Quince, Imperian Loza, Imperian Slivovitz and Imperian Klekovaca. Each beverage has a luxurious package, with an interesting slogan that says:”From Serbia With Love.”

Must say, the slogan reminds me of a Bond movie, “From Russia with love,” and I’m not sure if it’s 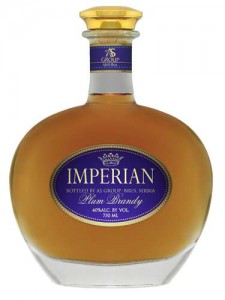 something like stealing the idea, or is it simply based on the love Mr Stosovic feels toward his motherland, to which he returned when he realized he can help her anyhow.Of course, we should recall, that stated how he really loves the process of creation of the brandy, all the way from the beginning, which means the collection of the fruit. Indeed, all fruit is gathered in an area close to his village, where the air is clear, as well as the earth and water.

Ecological factor is very important when it comes to production of the quality brandy. And, while we all hope that the area with such clean fruit won’t be disturbed, we also need to hope that there will be enough people to work on plantages, and in a distillery, so that we can never run of this liquid gold.